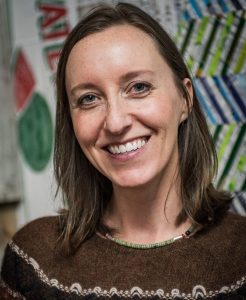 Jessica Wilkerson’s research interests include southern and Appalachian history, U.S. women’s and gender history, labor and working-class history, twentieth century social movements, and oral history. She earned her M.A. from Sarah Lawrence College and her Ph.D. from the University of North Carolina at Chapel Hill.
Her first book, To Live Here, You Have to Fight: Antipoverty, Labor, and Feminist Activism in the Appalachian South (University of Illinois Press, 2019), traces the alliances forged and the grassroots movements led by women in the Appalachian South in the 1960s and 1970s. The women she writes about were key leaders and foot soldiers in what contemporaries called the Appalachian Movement, which intersected with civil rights organizations and had its roots in the War on Poverty. Consulting a wide variety of sources, from film archives to manuscript collections and oral history interviews, the manuscript shows that women shaped the federal War on Poverty at the grassroots and then used the skills they learned in antipoverty programs to foster social justice activism, from welfare rights to labor and women’s rights. The dissertation on which the manuscript is based received the 2015 OAH Lerner-Scott Prize for the best dissertation in women’s history and the Herbert G. Gutman Prize for outstanding dissertation from the Labor and Working-Class History Association. She has been an American Fellow of the AAUW, and in the 2016-2017 academic year she was a visiting scholar at the American Academy of Arts & Sciences.

Wilkerson’s article “The Company Owns the Mine But They Don’t Own Us: Feminist Critiques of Capitalism in the Coalfields of Kentucky,” was published in April 2016 in Gender & History and received the A. Elizabeth Taylor Prize for the best article in women’s history from the Southern Association for Women Historians. She has also published in Southern Cultures and Working U.S.A.: The Journal of Labor and Society, and she contributed to North Carolina Women: Their Lives and Times—Volume 2 (University of Georgia Press). She has contributed to oral history projects at the Southern Oral History Program (UNC), including the “Long Women’s Movement in the American South.” You can hear more about that project here. With students at the University of Mississippi, she has helped to start a project on LGBTQ history in Mississippi.
Professor Wilkerson teaches classes in southern history, women’s and gender history, contemporary U.S. history, and oral history.