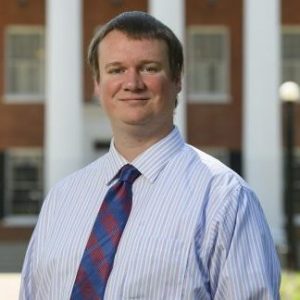 University of Mississippi student Eric Rexroat, a Ph.D. candidate in the Arch Dalrymple III Department of History, will study in Belgium this fall, thanks to the 2018 Fulbright U.S. Student Program.

A St. Charles, Missouri, native, Rexroat will be at the University of Antwerp, Belgium, from this September until March 2019. He will conduct research at the Royal Library of Belgium and National Archives of Belgium, both in Brussels, as well as work under the direction of professor Hilde Greefs and some of her colleagues.

Rexroat, who earned his bachelor’s degree at Southeast Missouri State University in 2012, vividly recalls how he received notification of his award.

“I learned while in Paris doing research that I had been chosen as an alternative (which he said he viewed as an achievement in itself), but my understanding was that there would be little chance of my being promoted to a finalist,” he said. “Obviously something changed, and it was a very pleasant surprise.”

For the past three springs, Rexroat has been recognized for his achievements. He received the Tenin-Alexander Prize from the history department for Best Graduate Student Paper in 2015, the Graduate Achievement Award from the College of Liberal Arts in 2016 and officially passed his comprehensive exams with distinction in 2017.

“My career goals include teaching European history at a college or university, as well as continuing my research and eventually publishing on 19th-century Europe,” Rexroat said. “Receiving this Fulbright award will enable me to work closely with and benefit from the feedback of my adviser at the University of Antwerp, as well as to expand my research by providing the opportunity to spend further time in Europe. The experiences I have during this stint abroad will be invaluable to my development as a scholar and a person.”

“Eric came as an M.A. student and has excelled ever since he stepped foot on campus, impressing faculty and colleagues alike with his seriousness of purpose and focus,” said Marc Lerner, associate professor of history and director of Rexroat’s dissertation.

“His dissertation research on free trade as ideology and political controversy in the mid-19th century is fascinating and important work. The comparative and international perspective is what makes this a particularly challenging and powerful dissertation topic. I am excited to see the results of his research.”

Established in 1946, the Fulbright program is the flagship international educational exchange program sponsored by the U.S. government and is designed to increase mutual understanding between the people of the United States and the people of other countries.

The primary source of funding for the Fulbright program is an annual appropriation made by the U.S. Congress to the U.S. Department of State, Bureau of Educational and Cultural Affairs. Recipients of Fulbright grants are selected based on academic or professional achievement, as well as demonstrated leadership potential in their fields.

Fulbright awards allow the Croft Institute and the other participating units on the Oxford campus to deliver on the university’s commitment to educating and engaging global citizens and supporting experiential learning, two cores established in the university’s new strategic plan, Flagship Forward.

Students interested in applying for the Fulbright U.S. Student Program award are encouraged to contact the Office of National Scholarship Advisement at onsa@olemiss.edu.