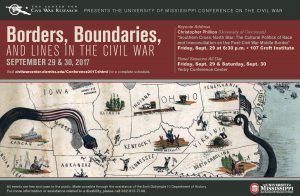 The Center for Civil War Research and the Arch Dalrymple III Department of History present the eleventh annual Conference on the Civil War to be held September 29 and 30 in Oxford, Mississippi. The theme of this year’s conference is “Borders, Boundaries, and Lines in the Civil War” and will include work that explores both literal and figurative boundaries, including the experiences of border states, the boundaries between slavery and freedom, border patrols, racial boundaries, and battle lines.

The keynote address will be given by Dr. Christopher Phillips of the University of Cincinnati, author of The Rivers Ran Backward: The Civil War and the Remaking of the American Middle Border, which was the winner of the 2017 Tom Watson Brown Book Award. Phillips will speak on “Southern Cross, North Star: The Cultural Politics of Race and Irreconciliation on the Post-Civil War Middle Border” on Friday, September 29 at 6:30 p.m. in 107 Croft Institute. This event is free and open to the public.

The 2017 Wiley-Silver Prize for Best First Book in Civil War History will also be awarded at the conference.

A complete schedule of events will available soon at the Center for Civil War Research site.