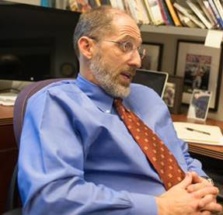 Paul Christopher Anderson (Ph.D 1998) has been named Clemson University’s historian. Anderson’s position will be essential to discovering and telling the complete history of Clemson University. His work serves to develop programs and initiatives aimed at understanding and interpreting Clemson’s history evidenced through examples such as History in Plain Sight events and historic tours or materials displayed on a dedicated website. Additionally, Anderson will develop recommendations for historical markers for consideration by the Board of Trustees and provide advice and oversight on matters of history and tradition that require interpretation, expertise and sensitivity.

Anderson joined Clemson University in 2000 after graduating with his Ph.D. from the University of Mississippi and quickly made an impact. He was among those profiled in The Best 300 Professors publication by the Princeton Review. In 2004, he was named Alumni Master Teacher, an award for outstanding undergraduate classroom instruction, which is presented to a faculty member nominated by the student body and selected by the Student Alumni Council.

Robert Krause (Ph.D 2011), recently published an article on Florida’s environmental history during the New Deal in the Florida Historical Quarterly, Vol. 97, no.1. (summer 2018): 1-34. Rob lives in Houston and works as an historic preservation consultant and practice lead in Disaster Management services for Gray & Pape, Inc.

Foote, who was regarded as one of the most vocal, well-traveled, and controversial statesmen of the nineteenth century, played a central role in a vast array of pivotal events. Despite Foote’s unique mark on history, until now no comprehensive biography existed. Ben Wynne fills this gap in his examination of the life of this gifted and volatile public figure in The Man Who Punched Jefferson Davis: The Political Life of Henry S. Foote, Southern Unionist.An eyewitness to many of the historical events of his lifetime, Foote, an opinionated native Virginian, helped to raise money for the Texas Revolution, provided political counsel for the Lone Star Republic’s leadership before annexation, and published a 400-page history of the region. In 1847, Mississippi elected him to the Senate, where he promoted cooperation with the North during the Compromise of 1850. One of the South’s most outspoken Unionists, he infuriated many of his southern colleagues with his explosive temperament and unorthodox ideas that quickly established him as a political outsider. His temper sometimes led to physical altercations, including at least five duels, pulling a gun on fellow senator Thomas Hart Benton during a legislative session, and engaging in run-ins with other politicians—notably a fistfight with his worst political enemy, Jefferson Davis. He left the Senate in 1851 to run for governor of Mississippi on a pro-Union platform and defeated Davis by a small margin. Several years later, Foote moved to Nashville, was elected to the Confederate Congress after Tennessee seceded, and continued his political sparring with the Confederate president.

From Foote’s failed attempt to broker an unauthorized peace agreement with the Lincoln government and his exile to Europe to the publication of his personal memoir and his appointment as director of the United States mint in New Orleans, Wynne constructs an entertaining and nuanced portrait of a singular man who constantly challenged the conventions of southern and national politics.

Ben is professor of history at the University of North Georgia. 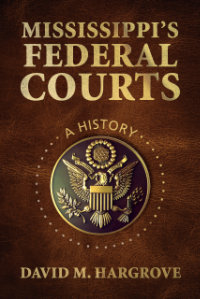 David Hargove (Ph.D 2011), recently published Mississippi’s Federal Courts: A History with the University of Mississippi Press.
This resource produces the first comprehensive history of the state’s federal courts from the inception of the Mississippi Territory to the late twentieth century. Using archival material and legal documents, David M. Hargrove untangles the state’s complex legal history, which includes slavery and secession, the Civil War and Reconstruction, Jim Crow and civil rights. In this important overview of the United States courts in Mississippi, Hargrove surveys the state’s federal judiciary as it rules on key issues in Mississippi’s past. He examines the court as it mediates conflict between regional and national agendas as well as protects constitutional rights of the state’s African American citizens during the Reconstruction and civil rights eras. Hargrove traces how political activities of the state’s federal judges affected public perceptions of an independent judiciary. Growing demands for federal judicial and law enforcement infrastructure, he notes, called for courthouses that remain iconic presences in the state’s largest cities. Hargrove presents detailed judicial biographies of judges who shaped Mississippi’s federal bench. Commissioned by the state’s federal judiciary to write the book, he offers balanced perspectives on jurists whose reputations have suffered in hindsight, while illuminating the achievements of those who have received little public recognition.

David is director of the Gibson Memorial Library in Creston, Iowa.