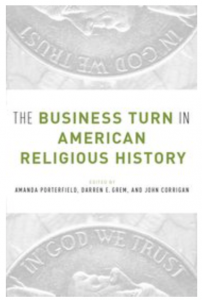 Edited by Amanda Porterfield, Darren Grem, and John Corrigan, The Business Turn in American Religious History, presents a holistic treatment of the influence of American business practice on religion.

Business has received little attention in American religious history, although it has profound implications for understanding the sustained popularity and ongoing transformation of religion in the United States. This volume offers a wide ranging exploration of the business aspects of American religious organizations. The authors analyze the financing, production, marketing, and distribution of religious goods and services and the role of wealth and economic organization in sustaining and even shaping worship, charity, philanthropy, institutional growth, and missionary work. Treating religion and business holistically, their essays show that American religious life has always been informed by business practices. Laying the groundwork for further investigation, the authors show how American business has functioned as a domain for achieving religious goals. Indeed they find that religion has historically been more powerful when interwoven with business.

Chapters on Mormon enterprise, Jewish philanthropy, Hindu gurus, Native American casinos, and the wedding of business wealth to conservative Catholic social teaching demonstrate the range of new studies stimulated by the business turn in American religious history. Other chapters show how evangelicals joined neo-liberal economic practice and right-wing politics to religious fundamentalism to consolidate wealth and power, and how they developed marketing campaigns and organizational strategies that transformed the American religious landscape. Included are essays exposing the moral compromises religious organizations have made to succeed as centers of wealth and influence, and the religious beliefs that rationalize and justify these compromises. Still others examine the application of business practices as a means of sustaining religious institutions and expanding their reach, and look at controversies over business practices within religious organizations, and the adjustments such organizations have made in response. Together, the essays collected here offer new ways of conceptualizing the interdependence of religion and business in the United States, establishing multiple paths for further study of their intertwined historical development.