Allen Hepburn on “Facing the Future: Children in Postwar Britain” 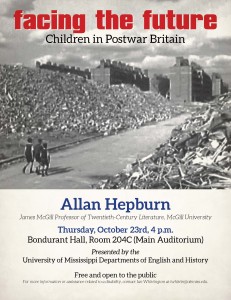 On Thursday, October 23rd at 4pm in Bondurant Auditorium, the departments of English and History will present a talk by Allan Hepburn of McGill University, entitled “Facing the Future: Children in Postwar Britain” (see the attached poster). His talk will focus on representations of children in British literature and film between 1945 and 1960 in the light of contemporaneous debates about child refugees, postwar rebuilding, and the rights and responsibilities of British citizenship. All are heartily encouraged to attend. Those of you teaching courses in twentieth century history and culture should feel welcome to invite your students.

Dr. Hepburn is the James McGill Professor of Twentieth-Century Literature at McGill University. He is the author of Intrigue: Espionage and Culture (2005) and Enchanted Objects: Visual Art in Contemporary Fiction (2010). He has edited three volumes of Elizabeth Bowen’s uncollected stories, essays, and broadcasts, and is currently writing a book about “Faith and British Culture, 1939-1962,” as well as a book about Elizabeth Bowen’s major fiction.