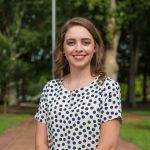 The 2020 Franklin L. Riley Prize for the best undergraduate paper has been awarded to Jessica Flach for “A Fate Worse than Death:  The Threat of Rape During the Civil War and the Southern White Woman’s Response.”

In her paper, which was produced in a history capstone seminar taught by Professor April Holm, Flach explains how the threat of rape was employed both by Union and Confederate soldiers in an attempt to control the behavior of white southern women during the Civil War. Using personal diaries, Flach demonstrates that these threats did not always have their intended effect. Some women responded by defying orders from both northern and southern men.