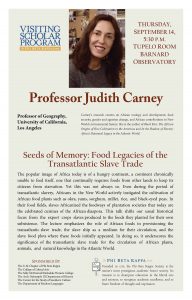 Judith Carney, Professor of Geography at the University of California, Los Angeles, will speak on “Seeds of Memory: Food Legacies of the Transatlantic Slave Trade” as the Phi Beta Kappa Visiting Scholar on Thursday, September 14 at 5:30 pm in the Tupelo Room inside Barnard Observatory.

Few Americans identify slavery with the cultivation of rice. Yet rice was a major plantation crop during the first centuries of settlement in the Americas. By the middle of the eighteenth century, rice plantations in South Carolina, and the enslaved Africans who worked them, had created one of the world’s most profitable economies. A longstanding question in American historiography is how rice, a crop introduced to the Americas, came to be cultivated in plantation societies. This lecture discusses the provenance of rice and its cultural antecedents in the Americas. It establishes, through agricultural and historical evidence, the independent domestication of rice in West Africa and the crop’s vital significance there for a millennium before Europeans arrived and the transatlantic slave trade began. This rice accompanied enslaved Africans throughout the New World, including Southern colonies, Brazil, and the Caribbean. Slaves from the West African rice region established rice as a food crop and provided the critical knowledge that enabled its cultivation. A comparative analysis of land use, methods of cultivation, processing and cooking traditions on both sides of the Atlantic during the plantation era help fill in the historical record. Recent genetics research and findings of African rice in botanical collections and among contemporary maroon societies of Suriname lend support for the African lineaments of rice culture in the Americas.

Carney’s research centers on African ecology and development, food security, gender and agrarian change, and African contributions to New World environmental history. She is the author of Black Rice: The African Origins of Rice Cultivation in the Americas and In the Shadow of Slavery: Africa’s Botanical Legacy in the Atlantic World.