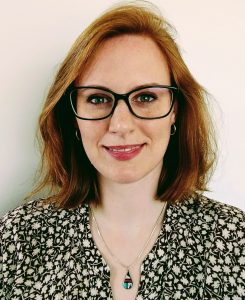 Mikaëla M. Adams is an Assistant Professor of Native American history. She received her doctorate from the University of North Carolina—Chapel Hill in 2012.

Her first book, Who Belongs? Race Resources, and Tribal Citizenship in the Native South (Oxford University Press, 2016), which was based on her doctoral work, explores how six southeastern Indian tribes—the Pamunkey Indian Tribe of Virginia, the Catawba Indian Nation of South Carolina, the Mississippi Band of Choctaw Indians, the Eastern Band of Cherokee Indians of North Carolina, the Seminole Tribe of Florida, and the Miccosukee Tribe of Indians of Florida—decided who belonged to their communities in the late nineteenth and twentieth centuries. As she argues in the book, the right to determine tribal citizenship is fundamental to the exercise of tribal sovereignty, which is a key concept in understanding the relationship between indigenous people and the settler-colonial government of the United States. Deciding who belongs to Indian tribes has a complicated history, however, especially in the American South. Indians who remained in the South following the forced removals of indigenous peoples west of the Mississippi River in the 1830s became a marginalized and anomalous people in an emerging biracial world. Despite the economic hardships and assimilationist pressures they faced, they insisted on their political identity as citizens of tribal nations and rejected Euro-American efforts to reduce them to another racial minority. Drawing upon their cultural traditions, kinship patterns, and evolving needs to protect their land, resources, and identity from outsiders, southern Indians constructed tribally-specific citizenship criteria that went beyond the dominant society’s racial definitions of “Indian.” By focusing on the rights and resources at stake, the effects of state and federal recognition of tribes’ political status, the influence of kinship systems and racial ideologies, and the process of creating official tribal rolls, Who Belongs? historicizes belonging and reveals how Indians established legal identities. The varying experiences of the six tribes in this study belie the notion of an essential or racialized “Indian” and show that citizenship in a tribe is a historically-constructed and constantly-evolving process.

Adams’s current research project, tentatively titled Influenza in Indian Country: Indigenous Sickness, Suffering, and Survival during the 1918-1919 Pandemic, will provide an ethnohistorical account of the world’s deadliest pandemic and its long-term consequences for Native American communities across the United States. It will explore how the virus infected indigenous people on reservations and boarding schools, how their living conditions in this period exacerbated the effects of influenza, how institutionalized segregation determined Native access to healthcare, how indigenous people responded medically, and how this health crisis affected the federal-tribal relationship. By combining the methodologies of medical history and ethnohistory, this project will highlight both the biological consequences of influenza on Native American communities and the ways that social constructions of race, ethnicity, sickness, and healing shaped the experience of infection for indigenous people in this time period.