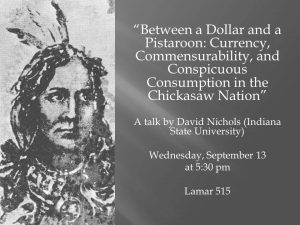 David Nichols, Professor of History at Indiana State University, will give a talk entitled “Between a Dollar and a Pistaroon: Currency, Commensurability, and Conspicuous Consumption in the Chickasaw Nation” on Wednesday, September 13 at 5:30 pm in 515 Lamar Hall.

Professor Nichols received his bachelor’s degree from Harvard University and his Master’s and Doctoral degrees from the University of Kentucky. He joined the faculty at Indiana State University in 2004 and became an associate professor in 2010.

His specialty is early America, with a particular interest in Native American history during the Revolutionary and early national era. He is the author of Red Gentlemen & White Savages: Indians, Federalists, and the Search for Order on the Early American Frontier (University of Virginia Press, 2008), and Engines of Diplomacy: Indian Trading Factories and the Negotiation of American Empire (University of North Carolina Press, 2016). He is currently working on a short history of the Great Lakes Indians and a study of economic change among the Chickasaws.