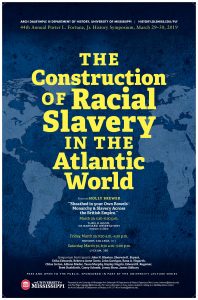 As part of a campus wide commemoration of the 400th year of the arrival of the first Africans in British North America coordinated by the UM slavery research group, we will examine the emergence of racially defined slavery in the Atlantic World and how it was challenged from the Age of Exploration through the Napoleonic Wars.  16 speakers will address the variety of racially constructed systems of chattel bondage created by different European imperial powers in the Americas, along with the ways in which challenges to these constructions both threatened and reinforced regimes of racial slavery.

An important goal of this proposed symposium is a much-needed reevaluation of the historiography dating to the 1950s, which began the discussion of the significance of the events of August 20, 1619 with a micro-analysis of racial slavery’s emergence in seventeenth century Virginia.  By contrast, our conference will take a much broader chronological and geographical scope, reflecting how scholarship on this topic has moved far beyond the confines of early colonial Virginia alone.