Before Dred Scott: Slavery and Legal Culture in the American Confluence, 1787-1857 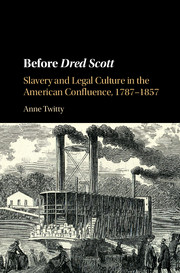 In her new book, Anne Twitty, associate professor of history, draws on a largely untapped collection of freedom suits filed in the St. Louis Circuit Court to construct a groundbreaking history of slavery and legal culture within the American Confluence, a vast region where three of America’s greatest waterways–the Ohio, the Mississippi, and the Missouri–converge.

Twitty persuasively demonstrate that although the American Confluence was formally divided between slave and free territories and states, it was nevertheless a site where the borders between slavery and freedom, like the borders within the region itself, were fluid. Such ambiguity, she argues, produced a radical indeterminacy of status, which, in turn, gave rise to a distinctive legal culture made manifest by the prosecution of hundreds of freedom suits, including the case that ultimately culminated in the landmark United States Supreme Court decision in Dred Scott v. Sandford. Challenging dominant trends in legal history, which have claimed that average Americans engaged with the law from a position of hostility, ignorance, or indifference, Before Dred Scott argues that the distinctive legal culture of the American Confluence, above all, was defined by ordinary people’s remarkable understanding of formal law and their willingness to employ it to suit their own ends.