A Kingdom Divided: Evangelicals, Loyalty, and Sectionalism in the Civil War Era 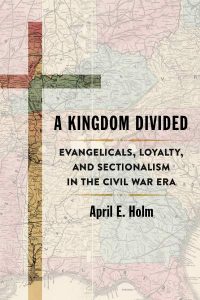 A Kingdom Divided uncovers how evangelical Christians in the border states influenced debates about slavery, morality, and politics from the 1830s to the 1890s. Using little-studied events and surprising incidents from the region, April E. Holm argues that evangelicals on the border powerfully shaped the regional structure of American religion in the Civil War era.

In the decades before the Civil War, the three largest evangelical denominations diverged sharply over the sinfulness of slavery. This division generated tremendous local conflict in the border region, where individual churches had to define themselves as being either northern or southern. In response, many border evangelicals drew upon the “doctrine of spirituality,” which dictated that churches should abstain from all political debate. Proponents of this doctrine defined slavery as a purely political issue, rather than a moral one, and the wartime arrival of secular authorities who demanded loyalty to the Union only intensified this commitment to “spirituality.” Holm contends that these churches’ insistence that politics and religion were separate spheres was instrumental in the development of the ideal of the nonpolitical southern church. After the Civil War, southern churches adopted both the disaffected churches from border states and their doctrine of spirituality, claiming it as their own and using it to supply a theological basis for remaining divided after the abolition of slavery. By the late nineteenth century, evangelicals were more sectionally divided than they had been at war’s end.

In A Kingdom Divided, Holm provides the first analysis of the crucial role of churches in border states in shaping antebellum divisions in the major evangelical denominations, in navigating the relationship between church and the federal government, and in rewriting denominational histories to forestall reunion in the churches. Offering a new perspective on nineteenth-century sectionalism, it highlights how religion, morality, and politics interacted—often in unexpected ways—in a time of political crisis and war.