The Blessings of Business: How Corporations Shaped Conservative Christianity 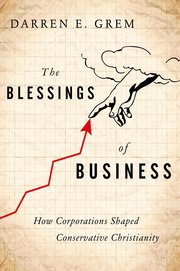 The Book of Matthew cautions readers that “Ye cannot serve God and mammon.” But for at least a century conservative American Protestants have been trying to prove that adage wrong. In The Blessings of Business, Darren E. Grem, assistant professor of history and southern studies, argues that while preachers, activists, and politicians have all helped spread the gospel, American evangelicalism owes its enduring strength in a large part to private enterprise.

Grem argues for a new history of American evangelicalism, demonstrating how its adherents strategically used corporate America–its leaders, businesses, money, ideas, and values–to advance their religious, cultural, and political movement. Beginning before the First World War, conservative evangelicals were able to use businessmen and business methods to retain and expand their public influence in a secularizing, diversifying, and liberalizing age. In the process they became beholden to pro-business stances on matters of theology, race, gender, taxation, trade, and the state, transforming evangelicalism itself into as much of an economic movement as a religious one.

The Blessings of Business tells the story of unlikely partnerships between well-known champions of the evangelical movement such as Billy Graham and largely forgotten businessmen like Herbert Taylor, J. Howard Pew, and R.G. LeTourneau. Grem also shows how evangelicals set up their own pro-business organizations and linked the quarterly and yearly growth of “Christian” businesses to their social, religious, and political aspirations. Fascinating and provocative, The Blessings of Business uncovers the strong ties that conservative Christians have forged between the Almighty and the almighty dollar.