The Empire at the End of Time: Identity and Reform in Late Medieval German Prophecy 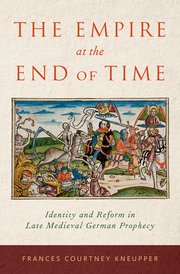 In her new book, Frances Courtney Kneupper, assistant professor of history, examines the apocalyptic prophecies of the late medieval Empire, which even within the sensational genre of eschatological prophecy stand out for their bitter and violent nature. In addition to depicting the savage chastisement of the clergy and the forcible restructuring of the Church, these prophecies also infuse the apocalyptic narrative with explicitly German elements-in fact, German speakers are frequently cast as the agents of these stirring events in which the clergy suffer tribulations and the Church hierarchy is torn down.

These prophecies were widely circulated throughout late medieval German-speaking Europe. Kneupper explores their significance for members of the Empire from 1380 to 1480, arguing that increased literacy, the development of strong urban centers, the drive for reform, and a connection to the imperial crown were behind their popularity. Offering detailed accounts of the most significant prophecies, Kneupper shows how they fit into currents of thought and sentiment in the late medieval Empire. In particular, she considers the relationships of German prophecy to contemporary discourses on Church reform and political identity. She finds that eschatological thought was considered neither marginal nor heretical, but was embraced by a significant, orthodox population of German laypeople and clerics, demonstrating the importance of popular eschatological thought to the development of a self-conscious, reform-minded, German-identified Empire on the Eve of the Reformation.