Who Belongs? Race, Resources, and Tribal Citizenship in the Native South 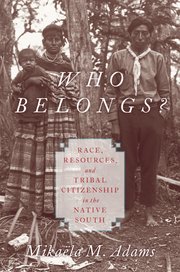 Who can lay claim to a legally-recognized Indian identity? Who decides whether or not an individual qualifies? The right to determine tribal citizenship is fundamental to tribal sovereignty, but deciding who belongs has a complicated history, especially in the South.

Indians who remained in the South following removal became a marginalized and anomalous people in an emerging biracial world. Despite the economic hardships and assimilationist pressures they faced, they insisted on their political identity as citizens of tribal nations and rejected Euro-American efforts to reduce them to another racial minority, especially in the face of Jim Crow segregation. Drawing upon their cultural traditions, kinship patterns, and evolving needs to protect their land, resources, and identity from outsiders, southern Indians constructed tribally-specific citizenship criteria, in part by manipulating racial categories – like blood quantum – that were not traditional elements of indigenous cultures. Mikaëla M. Adams, assistant professor of history, investigates how six southern tribes-the Pamunkey Indian Tribe of Virginia, the Catawba Indian Nation of South Carolina, the Mississippi Band of Choctaw Indians, the Eastern Band of Cherokee Indians of North Carolina, the Seminole Tribe of Florida, and the Miccosukee Tribe of Indians of Florida-decided who belonged. By focusing on the rights and resources at stake, the effects of state and federal recognition, the influence of kinship systems and racial ideologies, and the process of creating official tribal rolls, Adams reveals how Indians established legal identities.

Through examining the nineteenth and twentieth century histories of these Southern tribes, Who Belongs? quashes the notion of an essential “Indian” and showcases the constantly-evolving process of defining tribal citizenship.