Richard Wittmann to Lecture on European Craftsmen in the Ottoman Empire 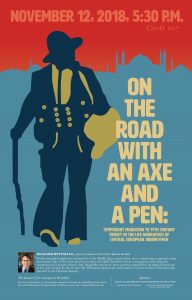 On Monday, November, 12th at 5:30PM in 107 Croft Hall, Richard Wittman, Associate Director of the Orient-Institut Istanbul, will give a lecture titled, “On the Road with an Axe and a Pen: Temporary Migration to 19th century Turkey in the Life Narratives of Central European Journeymen.” Traditional guild regulations dating back to the Middle Ages required that, after completing an apprenticeship, journeymen take to the road and practice their new skills elsewhere before coming home and taking the examination for master of their craft. Originally very short, these journeys expanded to far-flung destinations in the 19th century. In this lecture, Dr. Wittmann will explore the self narratives of a few of these craftsmen who traveled to the Ottoman Empire.