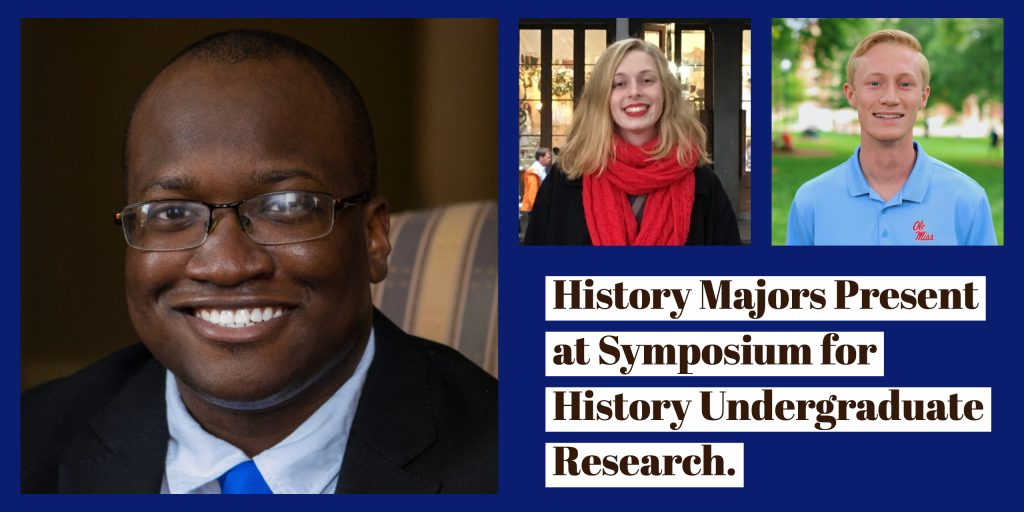 History and English major Jacob Ferguson, explored why and to what extent did white southerners and slave owners listened to slave testimonies in his paper, “Paternalism and Property Rights in the Slaveholding South: F.A.P. Barnard’s Trial at the University of Mississippi, White Southerners, and Slave Testimonies.” Ferguson’s starting point is the rape of Jane, an enslaved woman claimed by University of Mississippi Chancellor F.A.P. Barnard, who was attacked by a white student in 1859. Though the Board of Trustees found the accused student legally not guilty, Barnard had the student’s guardians withdraw him from the university, which led to questions among university faculty and prominent community members about whether Barnard was sound on the slavery question. Eventually, Barnard’s decision to take the word of a slave over that of a white student led to a second trial to determine where Barnard’s loyalties lay, and Barnard’s eventual resignation. Ferguson then considers a variety of situations in which slaves commanded an audience, including moments when masters were expected to listen to and respond to slave complaints. In discussing these circumstances at length, it arrives at a more nuanced understanding of the traditional slave-master relationship and what it meant to be a respected southern slave master.

Brian Hicks, a history and political science major, presented a paper entitled, “World War II: Alles, Axis, and EGYPT?!?!?: American and Egyptian Relations During World War II.”  Drawing on a collection of American State Papers from the World War II period, Hicks explored the trade and cultural relations between United States and Egypt during the course of World War II, with a specific focus on how trade relations not only benefitted Egypt, but also helped establish expanding American influence on the World. By doing so, Hicks aims to shed additional light on the ignored countries of World War II and add to the existing literature on the effects of World War II.

Finally, in “The Stories They Told: An Examination of The Stars and Stripes Newspaper Collection in the Archives of at University of Mississippi,” history major Jordan Holman explored The Stars and Stripes, a newspaper published in Paris by the American Expeditionary Forces (A.E.F.) in WWI to give insight into the lives of the American soldiers engaged in the conflict. Specifically, Jordan’s paper sought to give context to the tagline “by and for the soldiers of the A.E.F.” – uncovering what it means for a newspaper to be written by ex-soldiers for current soldiers. It also examines both the dialogue and narrative the soldiers created for themselves and one another, and how the soldiers catered to one another’s psychological needs through the written word, as The Stars and Stripes became, in the words of John Winterich, “the emotional pacemaker of the A.E.F.”