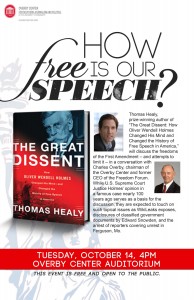 Professor of Law Thomas Healy of Seton Hall University will present “How Free Is Our Speech,” October 14, 2014 at 4pm in the Overby Center Auditorium.

Professor Thomas Healy writes about freedom of speech, the methods of judicial decision-making, and the role of courts in a democracy. His book The Great Dissent: How Oliver Wendell Holmes Changed His Mind – and Changed the History of Free Speech in America won the 2014 Robert F. Kennedy Book Award, the Hugh M. Hefner First Amendment Award, and the New Jersey Council for the Humanities Book Award. It was also selected as a New York Times Book Review editor’s choice and was named one of the fifteen best non-fiction books of 2013 by the Christian Science Monitor. He is currently at work on a new book about the civil rights movement, for which he received a Guggenheim Fellowship  and a Public Scholar Grant from the National Endowment for the Humanities.