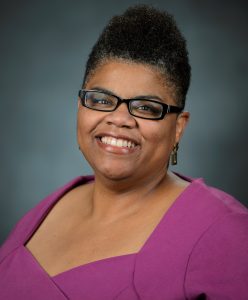 Assistant Professor of History and African American Studies Shennette Garrett-Scott has been awarded a Shelby Cullom Davis Center for Historical Studies fellowship to Princeton University for the 2016-2018 academic years.

Shennette Garrett-Scott is among only a half-dozen scholars from around the world to receive the Princeton fellowship this year. The theme of this year’s Davis fellowship is “Risk and Fortune.”

Garrett-Scott’s scholarship focuses on gender, race and business, all topics that coincide with a book she’s writing on African-American women in finance and banking.

Her book explores the Independent Order of St. Luke, a mutual aid society organized in Baltimore in the 1850s by African-American women. After moving to Richmond, Virginia, following the Civil War, the IOSL organized a bank that became the oldest operating African-American-controlled bank until it was purchased in 2011.

“My book is the first history of the insurance and banking industries that focuses on African-American women, tracing how they saved, lent and invested from the Jim Crow to the civil rights era,” she said.

The fellowship will allow her to continue her research while contributing her own knowledge to the intellectual culture at Princeton. The fellows will participate in weekly seminars, conferences, workshops and other activities to bring together scholars from different disciplines to study historically important topics.

“This fellowship will allow her to finish researching this very innovative topic and allow her the opportunity to dialogue with other fellows and faculty at Princeton,” said Charles Ross, UM director of African-American studies and professor of history. “This is a wonderful opportunity for Dr. Garrett-Scott and the African-American studies program is delighted that she was awarded this prestigious fellowship.”

Garrett-Scott, a native Texan, earned her doctorate in U.S. history from the University of Texas in 2011. She joined the university in 2013 and teaches courses such as “Experiences of Black Mississippians,” “Origins of the Jim Crow South” and “Oprah Winfrey, Gender, Race and Power.”