Registration: To register for the virtual lecture, simply click on the following link: https://olemiss.zoom.us/meeting/register/tJApfuiuqTIjGt3srypVy_hjBBbl1uOmZJTb 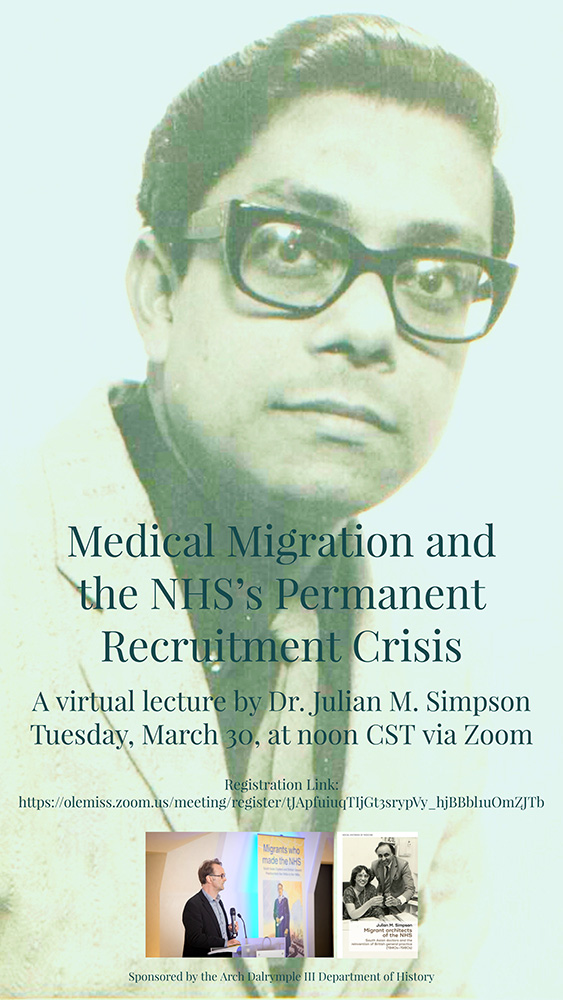 Lecture Abstract: Using oral history interviews and archival research I will explore the complex nature of the relationship between the UK’s National Health Service and the medical migrants who have played an essential role in staffing it since its inception in 1948. While lip service has been paid to their numerical importance, there has been less focus on the specific nature of the roles they have performed in the British healthcare system and what this reveals about the culture of medicine and the structure of the NHS. Medical migrants need to be understood as providing ‘special’ labour rather than simply ‘additional’ labour. In the first four decades of the NHS, migrant doctors were disproportionately represented in the provision of care for the least affluent and most vulnerable sections of society. I would argue that this is the core function of the NHS, hence that they were its architects. Their presence in fields such as psychiatry or areas of medicine such as inner-city general practice was not simply the product of a shortage of doctors in absolute terms. It was about the low-status of these forms of work within the British medical profession, and the emigration of their UK colleagues who chose to shun the opportunities that migrants used to build careers. Similar patterns in the deployment of medics can be observed in other westernised medical systems and I will conclude by highlighting the different ways in which this history is relevant to our understanding of global public health.

Speaker biography: Julian M. Simpson is an independent writer, researcher, and translator. He has worked in a number of capacities for various organisations, including the BBC World Service, the Scottish Refugee Council, the l’Afrique à Newcastle Festival and the University of Manchester. He is the author of Migrant architects of the NHS: South Asian doctors and the reinvention of British general practice (1940s-1980s) (Manchester University Press, 2018) and co-editor of History, Historians and the Immigration Debate: Going Back to Where We Came From (Palgrave, 2019).