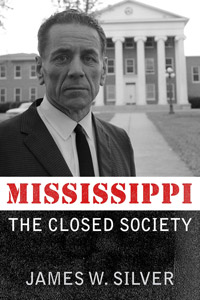 Silver began teaching history at the university in 1936 and served as chair of the Department of History from 1946 to 1957. He is perhaps best known for his work on the history of race relations in the state, especially the 1964 publication of Mississippi: The Closed Society. That same year, Silver took a leave of absence from UM and continued to teach at Notre Dame and the University of South Florida.

The collection of notes includes newspaper clippings about race relations as well as handwritten notes, thoughts and underlined sections in the articles relevant to him.

“This gift provides an important glimpse into the research process used by Dr. Silver in conjunction with this seminal work,” said Jennifer Ford, head of Archives and Special Collections and an associate professor. “These notes survive due to the noteworthy efforts of Doris Bain Thompson, and we are deeply indebted to her family for this donation.”

In 1968, Thompson was a teacher working on her master’s degree in American history when she took a course taught by Silver in Innsbruck, Austria. Following a class seminar, Silver discarded his research notes. Thompson gathered and kept what she believed to be 90 pages of research notes for the enlarged edition of Mississippi: The Closed Society, published in 1966.

In a letter to her family while in Austria, Thompson wrote that she was taking a “great course in race relations which I think I have already explained is being taught by James Silver, the author of Mississippi: The Closed Society and Thursday he threw out on the seminar table his research notes on the added 120-page addition that was included in the book. … I picked up all that were left after the others had left since he was leaving them for the janitors to clean up. Must have about 50 or 60 pages on yellow foolscap. Should be great to show a class how a researcher goes about writing such a book.”

Thompson taught American history and English to students at Lago Oil and Transport Co.’s school in Aruba and was also a director of choral music. Hansen said her mother was multitalented and also had an intellectual curiosity that drove her to keep learning.

She added that Thompson was a very visual teacher and likely saw these notes as an opportunity to incorporate an example of original research into her own American history courses.

While looking through family belongings, Hansen came across the notes, and she and her siblings decided to donate them to the university.

“We thought they would be more useful in archives, contributing to the subject matter, than they would be for us to keep them,” Hansen said. “We’re happy the papers are where they may be looked at as a small piece of a larger puzzle.”

This collection is a great asset to faculty, students and researchers studying topics dealing with race relations and Southern history, Ford said.