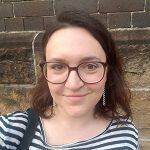 The Sarah Isom Center for Women and Gender Studies has awarded fellowships to six University of Mississippi faculty members for their academic research related to gender and sexuality, including the History Department’s own Dr. Alexandra Lindgren-Gibson.

Lindgren-Gibson, assistant professor of history, said she’ll be exploring the history of friendship in the British Empire in the 19th and early 20th centuries and is planning a research trip to archives in the United Kingdom this summer.

She hopes to find a few letter collections that can form the basis of an article and eventually a book proposal.

“My research is driven by two big questions: How did people live their lives in the past, and how have the stories of those lives been obscured for us in the present?” she said.

Lindgren-Gibson said she became interested in this research when she found a collection of papers in the British Library from an Afghan woman, Mermanjan, who married a British officer in the 1840s.

“The collection was totally fascinating – you could see her learning how to write in English, she made sketches of the new community she was a part of – so there are lots of images of women in massive petticoats and men in top hats; she and her husband would sketch together, and she kept scrapbooks.

“But I was also interested in how these papers came to the archive in the first place. They weren’t donated by Mermanjan’s family – which is the usual route – but they were donated by one of her friends to whom Mermanjan had left the papers when she died. And this friend made Mermanjan’s story part of her own family history – even though they weren’t related.

“I started to think about how friendship can shape histories and the way we remember and preserve the past. Friendships are powerful parts of almost everyone’s life, but our archives aren’t set up to preserve the histories of those ties.”