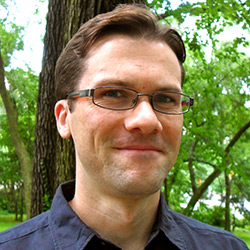 Jarod Roll is a historian of modern America. He specializes in labor and working-class histories of capitalism, with a particular interest in social movements and popular economic thought. He is the author of Spirit of Rebellion: Labor and Religion in the New Cotton South (Illinois, 2010), which won the C. L. R. James Award, the Herbert Gutman Prize, and the Missouri History Book Award. Roll is the coauthor, with Erik S. Gellman, of The Gospel of the Working Class: Labor’s Southern Prophets in New Deal America (Illinois, 2011), which won the H. L. Mitchell Award from the Southern Historical Association.

He has also published research in the Journal of Southern History, Religion and American Culture, Labor History, Southern Spaces, Radical History Review, and LABOR: Studies in Working-Class History of the Americas, as well as edited volumes on Populism, African American landowning farmers, and working-class Christianity.

Roll earned his B.A. from Missouri Southern State University, and his M.A. and Ph.D. from Northwestern University.

As the recipient of an National Endowment for the Humanities Fellowship, he is on leave during the 2017-2018 academic year.