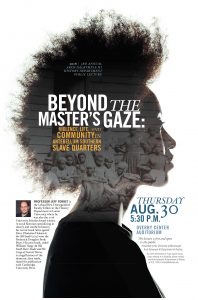 Dr. Jeff Forret will deliver the third annual Dalrymple Lecture, “Beyond the Master’s Gaze: Violence, Life, and Community in Antebellum Southern Slave Quarters,” on Thursday, August 29th at 5:30PM in the Overby Center Auditorium. This event is free and open to the public.

Forret is the Leland Best Distinguished Faculty Fellow in the History Department at Lamar University, where he was also the 2016 University Scholar Award winner. A social historian specializing in slavery and southern history, his recent book Slave against Slave: Plantation Violence in the Old South (2015) won the Frederick Douglass Book Prize. His next book, titled Williams’ Gang: An Old South Slave Trader and His Cargo of Convict Slaves, is a legal history of the domestic slave trade, slated for publication with Cambridge University Press.

This event will help inaugurate a series of speakers and events across campus during the 2018-2019 academic year to commemorate the August 1619 arrival to British North America of the first recorded persons of African descent. Additional events with Dr. Forret are scheduled with undergraduate and graduate students in the department of history and the University of Mississippi Slavery Research Group.